Today's project (day off, woke up early, got up early) was to be finishing off a bunch of old Citadel Medieval archers from back in the day....1982 to be precise. Good old Citadel lead. I based and undercoated these about 8 years ago...possibly longer and have recently been following a painter (George Hatzopoulos) doing incredible work with some Claymore Castings French Medievals.....(pics borrowed off his Facebook page).....I was enthused! 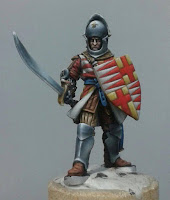 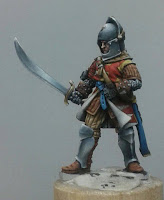 Whilst I am not in George's league, I do enjoy my painting and was looking forward to some production line technique in order to get a bunch completed........imagine my surprise when I was faced with this..... 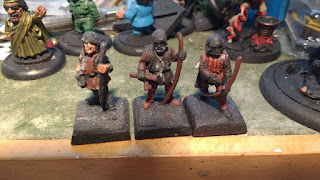 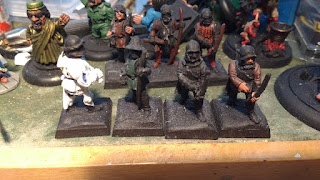 When I tried to clean them up it became obvious they were beyond saving....the undercoat had not protected them from moisture or acid vapour from the wooden drawer? Maybe I'd used PVA adhesive to attach them to the bases - PVA contains vinegar I believe - or even using the DIY filler for groundwork as that contains PVA. Who knows........the jury is out on the cause of the 'rot' and I have read many interesting articles / debates on how to prevent / restore etc. Suffice to say I knew these poor castings were beyond redemption......each scrape of the knife let loose a plume of lead (carbonate?) dust......not something to be taken lightly.

The offending drawer.............it has featured in a previous post on the same subject so I will be losing these drawers forthwith..... 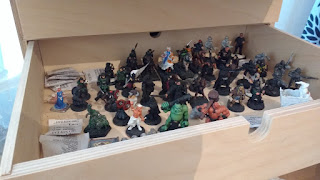 and grouped ready for the ultimate dismissal..... 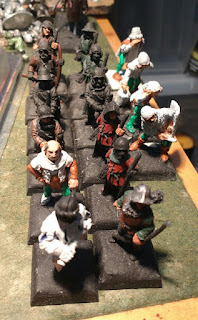 Fortunately Wargames Foundry have them all re-released in fine new metal here (sample pic borrowed off their site for illustrative purposes only!)

I shall now go and make a cup of tea and then return to the mess that is my painting table...... 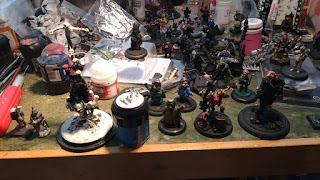 The world was introduced to Finieous back in October 1976, courtesy of TSR's Dragon Magazine Volume 1, No.3. The creator, J.D.Webster apparently based his characters on friends he gamed with. 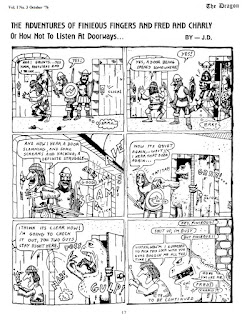 After moving from Dragon Magazine, both Finieous and the then editor, Tim Kask, moved to Adventure Gaming Magazine. The set was released in 1982...this was (as noted below) an attempt to keep 'Adventure Gaming' magazine afloat.... 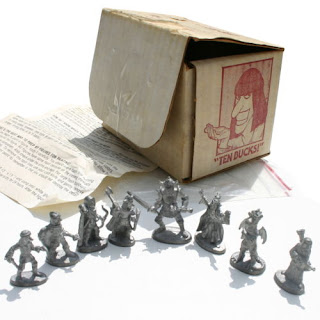 I've had the miniatures for some years although I recently picked up the box, courtesy of the wonderful artist Lissanne Lake. Only the leaflet to find now!

Some better images here on the Lost Mini WIKI.

Finieous later moved to Steve Jackson's 'The Space Gamer' and 'The Fantasy Gamer' in April 1984 and finally to Shadis' magazine which was set up by Jolly R.Blackburn in 1990....eventually becoming Knights of the Dinner Table magazine which gave birth to another set of Tom Meier minis to be documented at a later date.....

Jolly Blackburn mentioned on a recent Facebook post; 'We did some Finieous Finger strips in SHADIS. J.D. approved the scripts (but was too busy to draw them) and we contracted a different cartoonist --- who I thought did a great job updating the character. It was going pretty good til JD and the cartoonist had a falling out/creative differences. I remember one strip where Finieous finds himself on a Space Hulk-type environment with aliens running amok.'

Some years later Thunderbolt Mountain released a set, again sculpted by Tom Meier.....this has caused some controversy recently due to licensing issues. Not sure what happened in the end or if it was justified as I think there may have been confusion in thinking someone had re-released the original set. These are definitely new sculpts (although only 6 in this set)..... 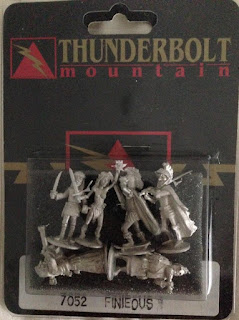 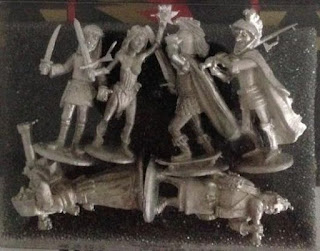 According to an article from Comicvine;

He continued to appear there intermittently until 1981's issue 54, and his adventures were collected in The Finieous Treasury that same year. After a brief hiatus, Finieous resurfaced in Manzakk Publishing's Adventure Gaming magazine, before moving to Steve Jackson Games' magazines Space Gamer and then Fantasy Gamer, and eventually Alderac Entertainment's Shadis magazine. 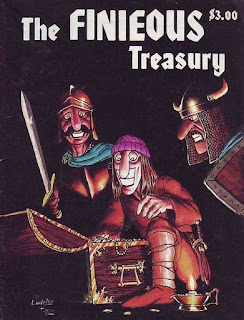 A few comments from a 2004 thread from The Miniatures Page;

......there were indeed fineous figures.
they sometimes turn up on ebay but the molds were destroyed long ago. (actually I think Tim Kask still has them but by agreement with JD, they were a limited run only.) The production molds were burned up in the process of casting as many figs as we were able in the time allowed us.
There were also 10 gold plated sets created at that time.
JD has one, I still have mine, The Gorb still has his I believe. Im sure T. Kask has his and I'm pretty sure T Meire still has his. I have no idea where the other 5 sets are.
I know that one set went for $100 at an Origins auction a few years back.
Thats about all I can remember of them, its was about 20 years ago.

Yeah, and Ravenscraft has the world's only unit of Grond.

The Fineous figures made their debut at the 1982 Origins in Baltimore.

IIRC, Ral Partha lured Tim Kask away from being editor of the Dragon to start Adventure Gaming in 1981. Tim brought JD & Fineous along.

During the big Partha management shakeup of '82, they decided to dump AG. A group of us tried to keep it going but we just didn't have enough capital.

I think after distributor discounts, we were selling a magazine with a $3.50 cover for $.90. The average distributor also had an average-days-to-pay of about 6 months even though terms were 2/10 net 30.

The Fineous figs were a last ditch effort to raise enough cash to cover production expenses. They worked to a point, I think we got out issues 11-13 on that money.

I believe the Shadis strips were "with permission". They did not look like JD's work, but they were welcome.

As to JD, a late '70's graduate of Auburn NROTC and the best D**n GM I've ever played with, the last I heard, he was married with a teenage daughter (Proof: There is a Dept. of Cosmic Justice.), flying for Northwest, and living in Michigan (?). As for the models for some of the crew, BoredFlak (Borflac/Everette Burge) was back in Selma, IDemandMore (Ozyamadas/Grant Castlebury) is doing the areospace thing for REAL money in TX and FF (me) is delivering mail in B'ham. I was going to get with JD at DragonCon '90, but that was when I started with the post office, and I missed him. Personally, I liked his mailing cover efforts for Space Gamer. Think Nuclear Hand Grenade.

For those with a real Fineous jones, I think Boredflak's "targeting ring" is still available from Atlantis miniatures.
comes with a nice ruby looking stone.
cant remember the price. If Atlantis isnt alive and kicking you can try contacting Thunderbolt Mountain Miniatures who did production for Atlantis.
Man, do I miss Fineous!

If anyone knows anything the 'targeting ring' mentioned above (or indeed the gold plated sets) please let me know. I can't find Atlantis Miniatures (barring a new UK organisation).

This was an addition for the original game (details here).

I haven't painted any of the Ral Partha Collector Series in a long time so decided to have a go on one that had turned up in a job lot. Having completed one I have the caught the bug for more but I have no idea where my box of them are so he will have to do for now. Excuse his left eye - I missed the mold line somehow when cleaning him up and eventually gave up trying to paint that eye......just need to finish the base and varnish him now.

When this range first came out I was overwhelmed by the sheer beauty of the sculpts....no-one, in my opinion, had managed to capture the beauty of the Elven form like Tom Meier. Today it is different with the likes of Werner Klocke, Kev White etc but back in the day Tom ruled almost unchallenged.

The full CS range is listed on Lost Minis here and also on Stuff of Legends here.

I've borrowed the listing off Stuff of Legends to point out that there are gaps in the numbers - does anyone out there have any idea of anything that should be filling them? There are no catalogue clues anywhere.

Iron Wind Metals have re-released a lot of them in their Chaos Wars line (here) and Tom has added a couple of sculpts to the line. Tom really is the master of the Elven form - check out his Thunderbolt Mountain sculpts here.

Back in the 1970s that glorious old supplier of lead, Asgard Miniatures, released FM24, Silent Shambler, Halloween Goblin. It was designed by either Tony Ackland or Bryan Ansell, not sure which of them....... 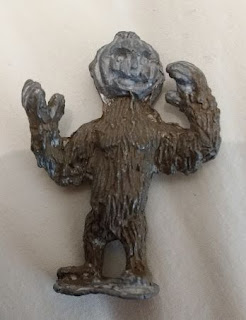 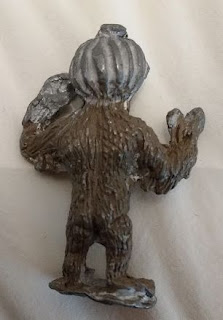 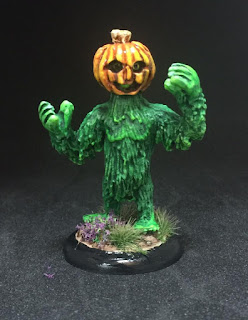 It was listed in an October 1978 ad in Military Modelling;

Based on the 1975 TSR D&D illustration by Greg Bell from the Greyhawk supplement..although they never called it a Bugbear, possibly for copyright reasons....edit; apparently there may be a baggie with Bugbear on....more to come when proven! They were also known as 'Jack-o-Bears' in the Runequest gaming universe.... 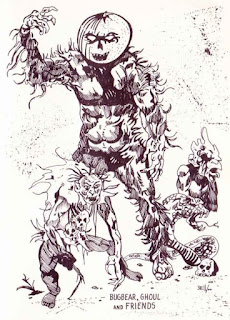 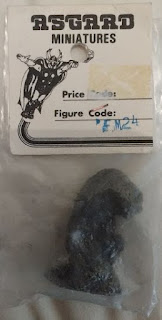 A later code, FM71, was designated as a Bugbear (painted example below c/o Mark Stevenson of the 'Asgard Miniatures Collectors' Group on Facebook and line drawing from the 'The Armory Guide') when Bugbear had become a more generic term....... 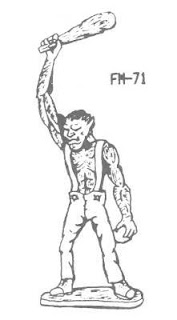 Now, the conundrum is whether or not there was a version 1 of the FM71 code and if this was indeed the pumpkin-headed variant above, moved from the FM24 when it was redesigned......20 internet points to anyone who can help.....

Oh, and never forget the ongoing enigma on the FM18 Secrom. Never pictured anywhere that I know of, and later changed to Skeleton Warrior. 100 internet points for the solving of that one......and I might even throw a blog mini in as it's really annoying me!

Most of the Asgard lines are listed, mostly with accompanying images, on the Lost Minis WIKI, a boon for collectors of old (and not so old) lead.