Terence Gunn recently posted an update on his Fantastic World of Grenadier Kickstarter showing a picture of a Grenadier Snow White & The Seven Dwarves painting set (or 'Complete Art Craft Kit')......I was gobsmacked as, in all my years of collecting, I had never even heard a rumour of this. The fact that Grenadier had had such a licence and it hadn't been more widely marketed astounds me (although possibly points to a lack of skills in that area which may have been another possible lynchpin in their final demise......).

A quick Google search found an old eBay auction and I contacted the seller about using the pictures.....he didn't have another copy before you ask! I was piqued by the wording on the auction as it stated he had been an in-house sculptor for Grenadier back in the day....he turned out to be none other than the legendary John Dennett!

Hello David,
Yes, go right ahead and use the pictures if you wish. I like that these vintage pieces still have an interest out there and that you have a desire to help keep them alive with your blog.
Best wishes,
John Dennett

On attempting to purloin a hidden second copy......

Hi David,
Not likely those will show up again. Not that many were produced as I was told. My copy was given to me when I first came to work at Grenadier and I've never seen another set since then offered anywhere. The only reason I let mine go is that I felt it was time to let someone else enjoy it.

John's wording on the auction was very interesting;

Presented here is a very RARE boxed set of Disney Classic Figurines depicting Snow White and the seven dwarfs and other characters plus a set of 8 acrylic paints, paint brush, illustrated painting guide and a backsheet with photo showing the contents of the set.
These figures are white-metal castings that fall within the scale of Role Playing Game figures that were popular at the time. The dwarves are approximately 25mm in height where Snow White and the prince are about 40mm.
Though it is not mentioned anywhere on the box or literature, this set was produced in the USA by Grenadier Models around 1980 if not before. During the years 1982-86 I was employed as an in-house sculptor at that company which is how I know for certain the history of this set of licensed Disney collectibles.

There are twelve castings which include:
Snow White
The Prince
The Witch
Happy
Grumpy
Sleepy
Sneezy
Dopy
Doc
Bashful
Mining Cart
Diamond Pile (that is meant to sit in the cart)

NOTE: These miniatures contain lead and as such are now considered an adult collectible item not recommended for young children.

This set is well over 35 years old so even though the paint cups remain unopened, I don't expect them to be usable at this point but I won't open them to find out. Everything else; the figures, box, painting guide etc. are in great vintage condition with very minor signs of age.

Without further ado here are the images.....all copyright John Dennett and, as stated, used with his permission. 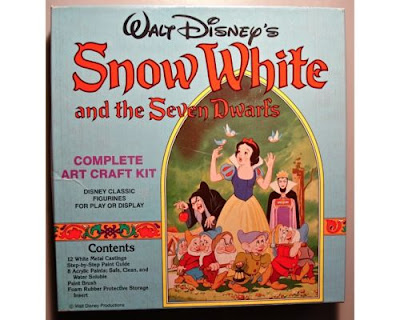 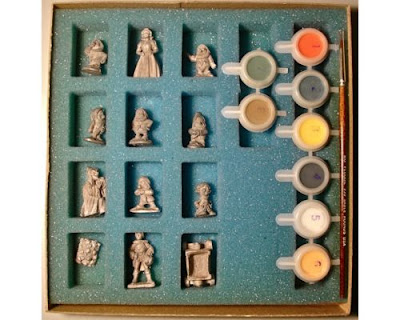 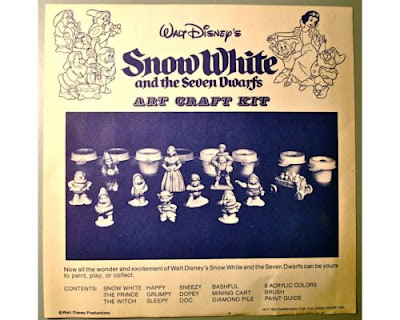 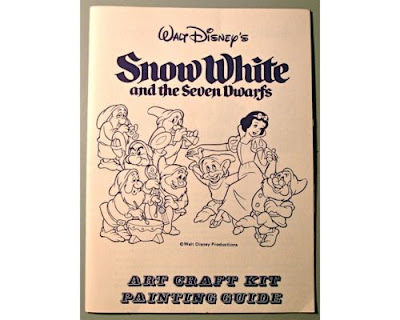 I think it goes without saying that I am after this set.......

Do please back Terence' Kickstarter as it is a worthy project and will be a great hobby reference for everyone.


John Dennett is still sculpting away of course so take a gander over at his Moon Devil Studio site. A lot of John's gaming miniatures are shown over on the Lost Minis WIKI here.

As always; enquiries@deartonyblair.co.uk
Posted by David Wood at 11:47:00

Thanks for the detective work....very interesting indeed :)

Nice! Never heard of it. I've always been after the Dark Crystal sets.

Wow, that really is a rare treasure. Hope you hunt one down, and find it. This likely came out during the dark days of Disney, which may explain how the licence was acquired. Pre-Little Mermaid/Lion King, Disney was hurting as a company and was probably doing anything it could to keep things alive.

I found one at the thrift store and can't find any info on it!!!!! Just this!