Tom Meier is, for me, the most accomplished miniatures sculptor of this generation. I have been in awe of him ever since the first Ral Partha figures were imported by Wargames Publications (Scotland) Ltd back in the 70s. I could not understand how so much detail could be added to a figure.......nowadays it's commonplace for sculptors to stretch the boundaries of their art but back then....well, it was just a 'wow' factor. Citadel / Games Workshop started importing and then producing Ral Partha miniatures and the rest is history. He formed Thunderbolt in 1988 after leaving Ral Partha (there is a history there in itself waiting to be written)....

Edit (thanks for the push Jacob!).....Tom's early days were spent at Ral Partha (that history deserves a post of it's own) who are now re-releasing most of his old sculpts, remastered and including some new works......well worth a look through the site......some of the old Empire of the Petal Throne sculpts are in the 'coming soon' sections....

If you go to the blog section there are loads of articles includes the old (and new) 'Fantasysmith's Notebook' that I read in my youth and was a great source of both inspiration and frustration due to not getting many of the miniatures over this side of the pond....

In fact, just looking at the site now makes me remember how much Tom has contributed to the hobby....he's awesome! Here he is via Iron Wind Metals You Tube channel (also worth checking out)....

Tom works mainly in the toy industry nowadays although is rarely able to publicise his work as he has to sign non disclosure agreements.....it is far more lucrative than the hobby and games industry and, as such, the time involved in keeping Thunderbolt Mountain up and running has to be put elsewhere..... Jim Ludwig of Darksword Miniatures spoke to Tom a few weeks back and he confirmed this was the reasoning behind the decision. If you check out Darksword's selection of Tom's sculpts you may become as hooked as I am on them.......especially the Game of Thrones minis of course....not based on the TV series but taken from the books and all authorised by George R.R. Martin... 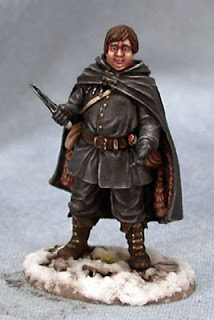 3 of Tom's historical Byzantines....I've just ordered them after finding them on the Thunderbolt Mountain site..... 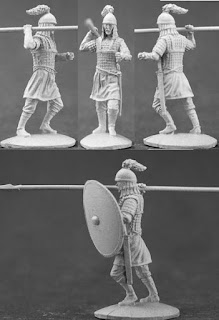 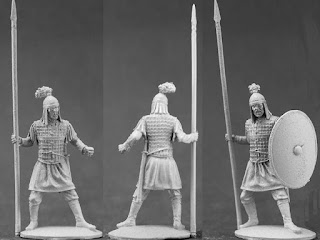 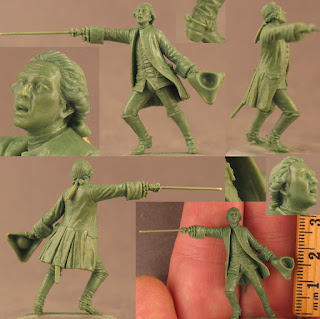 Ballerina Fairy Infantry (for his daughter)

Painted here c/o Garden Ninja Studios.....never seen his site before and am gobsmacked! 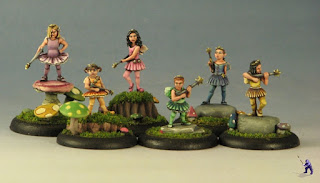 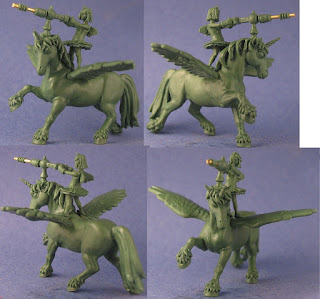 Slug Eat Your Face (for his son) 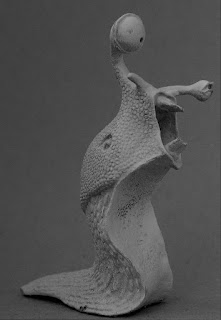 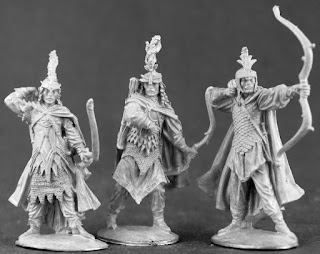 Best to go and visit the site and pick up these classic sculpts before they become history. It just cost me $120 and I thought I had most!

Tom sculpted a bunch of other bits and pieces whilst he was in the UK in the 80s including some whimsical earrings and badges.......at last count I think I have found 40 different types.... 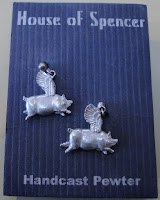 These badges (a small selection, most of which I've never seen catalogued) were only available for a short while..... 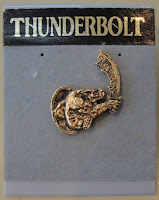 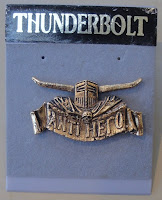 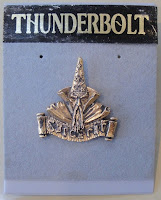 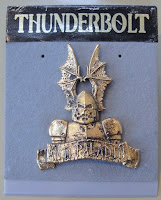 Thunderbolt also released a large amount of small vignette pieces that can be found on eBay occasionally. A good source of pics for all the releases is, of course, the Lost Minis WIKI here but, more specifically the vignettes, here. 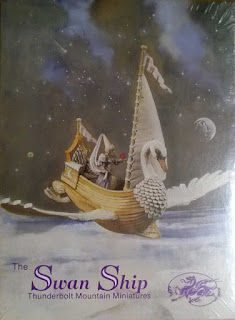 Incredible version of one release by Dirk Stiller...check out his site here. 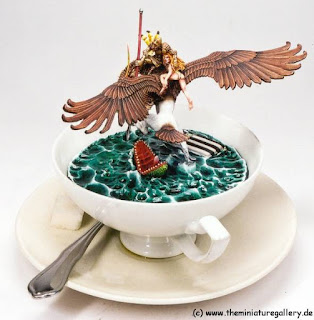 Tom also sculpted a bunch of WW2 soldiers in 40mm 'scale' for Fox Industries....a project that has yet to see the light of day unfortunately (Edit, a little bird just informed me that the miniatures are back on track......no more for now).....details from an old 'The Miniatures Page' post here...last blog post was in 2012 from Fox Miniatures.

I finished sculpting the 1/48 WW2 line for Jim Fox about four or five years ago. He hasn't put it in production and I don't know why.

Germans are 'D' rather than 'G' because it's easier to scribe and read on the base. 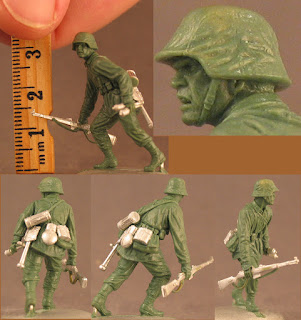 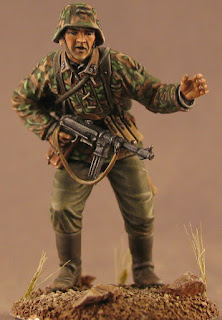 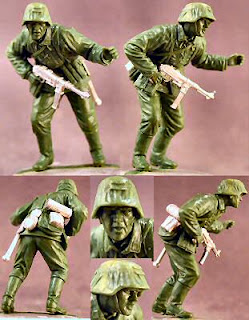 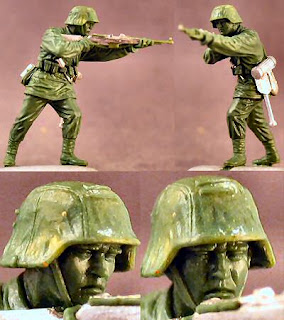 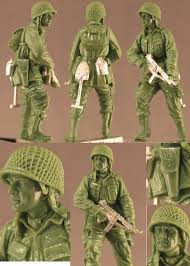 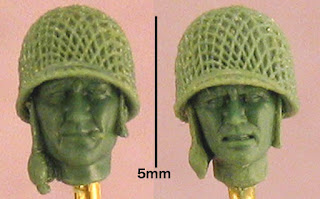 The only miniature hobby work I've done in the last decade or so has been for Jim Ludwig at Dark Sword and a few 15mm figures for Khurasan.

There are many reasons for this but the key one is probably economic. Sculpting miniatures, like crime, just doesn't pay. In 1980 I was paid $300 USD for a relatively simple true 25mm figure, according to an online inflation calculator that's $862 USD in 2014 currency. For the same figure today I would expect to get about $400 USD so in real terms the pay has halved. So while the money was great in 1980 now it's only somewhat better than working at 7/11 when you factor in work hours, self-employment tax and lack of benefits.

I have done several more 54mm nativity figures, shepherds, sheep and an angel but I haven't put them in a mold. Sculpting is free (for me obviously) but molds are an expense. I intend to work on the project for the rest of this year but I probably won't make molds until I have everything but the wise men done. The stable animals are proving difficult. The style is based on Albrecht Durer's woodcuts and it's hard to get right. I'm also going to make a micro version in HO(about 20mm). 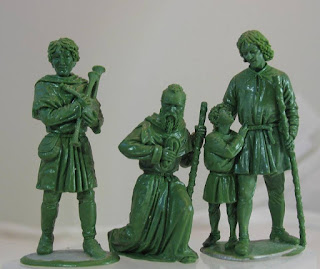 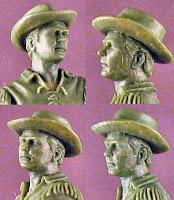 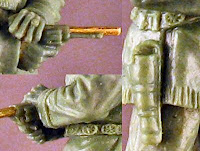 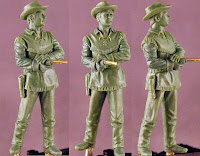 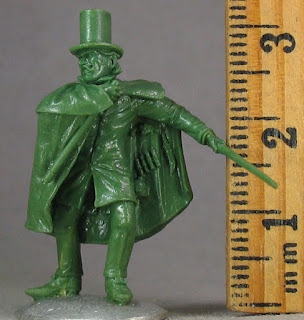 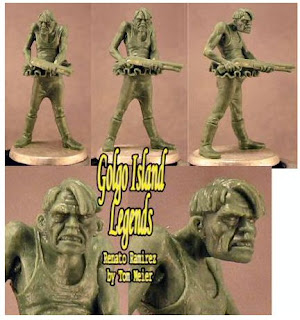 From the wonderful Goglo Island range by East Ridings Miniatures...get it here.

I'm going to miss Tom's work, but still hope to commission him for some Greyhawk-themed miniatures, someday....

Sad news! Tom is really one of the most important sculptors in miniatures. I mean, he gave us green stuff.


I'm glad you like the fairy girls I painted. I really loved doing their faces. I also got a chance to paint up Tom's Nativity (also Thunderbolt Mountain).