Looking for TTG Reaper rules and Attack of the Fungoid Trolls...

A long time ago, well, around 1978, in a galaxy not so far from Nottingham, two young men by the name of Richard Halliwell and Richard Priestley penned a set of rules for tabletop gaming... it was published by Tabletop Games and set the world by storm... sort of. Only Mr Halliwell's name appeared on the front of the first edition... apparently they had run out of Letraset! The first edition was ringbound, followed later by the second edition which featured both names on the front... Rick Priestley had finally arrived! Both versions were illustrated by the wonderful Tony Ackland and Tony Yates.

Well, I'm after the original sets of rules and the later expansion, Attack of the fungoid Trolls (penned by both Richard Halliwell and Bryan Ansell)... I can offer cold, hard cash or trade stuff... email me and let me know! 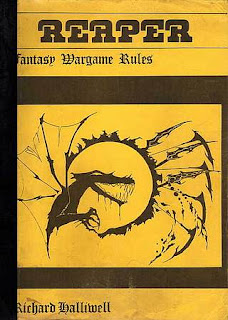 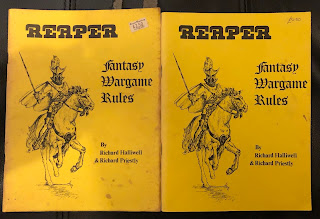 The short supplement included a separate sheet of counters... 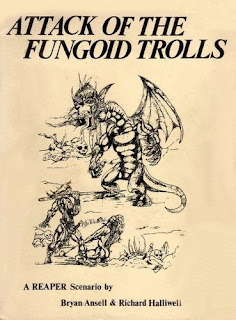 Images of the original rules and the supplement are c/o 'The Miniatures Page', links attached to the pics.
Posted by David Wood at 15:11:00

Me too David! I'd quite like a copy of the original - in fact published by the Nottingham Model Soldier Shop with a little help from Asgard - or even a scan of it - alas they seem as rare as a rare thing... one day :)

Truth is it's more to get a copy to you Rick!

Had it, lost it, want it again!